The Girl Who Slept with God 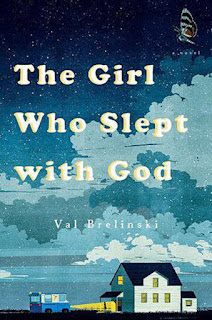 Set in Arco, Idaho, in 1970, Val Brelinski’s powerfully affecting first novel tells the story of three sisters: young Frances, gregarious and strong-willed Jory, and moral-minded Grace. Their father, Oren, is a respected member of the community and science professor at the local college. Yet their mother’s depression and Grace’s religious fervor threaten the seemingly perfect family, whose world is upended when Grace returns from a missionary trip to Mexico and discovers she’s pregnant with—she believes—the child of God.

Distraught, Oren sends Jory and Grace to an isolated home at the edge of the town. There, they prepare for the much-awaited arrival of the baby while building a makeshift family that includes an elderly eccentric neighbor and a tattooed social outcast who drives an ice cream truck.

The Girl Who Slept with God is a literary achievement about a family’s desperate need for truth, love, purity, and redemption.

Although I must comment by saying that I thought the author gave an insightful look into what a truly devout evangelical Christian family life must be like. I am a Christian but my family was not like this. In a way I found the three sisters to be more disjointed then close knit. Out of the three sisters I found Jory to be the strongest of them all. I had mixed emotions about the ending of the story. Not to give anything away. It was just because of how all of the events lead to the ending. This book is a pretty good read.
Val Brelinski