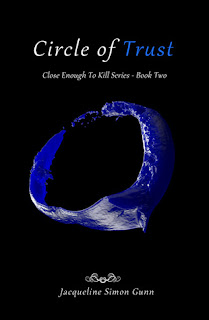 A gruesome murder...
Radio psychologist Jacob Temple is found dead on the floor of his den. A gaping wound in his neck, lacerations crisscrossing his chest, a fork bored into each eye.

No break-in. No evidence.

Bouncing back and forth in time, the story of Jacob Temple's life unfolds as told by the people closest to him, particularly his ex-girlfriend Jane Light, who has been stalking Jacob for nineteen years, ever since he left her. Still reeling from her boyfriend Noah's murder, Kadee Carlisle works alongside Detectives Poole and Gibbs to unravel the facts behind Jacob Temple's life and death. As time ticks away, Kadee struggles to reconcile her conflicted feelings about her own past--and present--and their ominous parallels to the Temple case.

When the circle of trust is broken...
As the hunt for the killer ensues, a tragic love story unfolds, along with a plan for vengeance and an unflinching look into the mind of a murderer. But will they ever figure out who killed Jacob Temple? Piercing the thorny line between facts and deception, passion and obsession, this torrid thriller illustrates one important thing: SOMETIMES THE CLOSER YOU ARE TO THE TRUTH, THE HARDER IT IS TO SEE.

This is the first time that I have read anything but this author. I thoroughly enjoyed this book, despite the fact that I had not read the first book in this series. There was enough of the dialect that I was able to put the pieces together for the most part of what happened in the first book. Although, after finishing this book I do want to go back and check out book one. I liked Kadee Carlisle and Detectives Poole and Gibbs. I thought they all worked well together. There was a little sexual violence in this book but it was not long or drawn out. It only happened to be mentioned a time or two. What really drew me into this story was the characters. It is more character driven then psychological and suspenseful. While as far as when it comes to my taste in books. Yet, I was not disappointed by this factor. In fact, the last third of this book is where the story really comes together. The cliff hanger of an ending is great. It left me wanting more and looking forward to reading the next book to find out what happens.
Jacqueline Simon Gunn