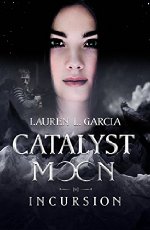 Trouble is brewing in Whitewater City where Kali, a crippled mage must meet with a powerful healer. Together with her escort, Stonewall - a man with nothing left but his own name, they must defeat bloodthirsty bandits. But with every strife comes a discovery of new landscapes within each other’s hearts.
My Review

This is an nice, interesting read. The lay of the land got me excited. I found Kali to be a surprise. Each time that she used her abilities there seemed to be something new that even Kali was learning about her full powers. Although, I agree with another reader that the use of the other characters calling Kali "Mage Halcyon" was confusing at first. This is because the author really did not it clear that Mage Halcyon and Kali were the same person. It was not until after about chapter 10 that Kali even questioned what Stonewall was calling her by the other name that he explained it was out of respect.

In fact, the first 5 to 6 chapters were not really explained that well in regards to the events or why Kali found herself in handcuffs at the beginning of the story. Yet, I stuck with the story despite this as I liked Kali and I did find the story to have action and it moved at a steady pace. If you can get past this then the story does get better the further you get into it. In regards to the romantic relationship between Stonewall and Kali, if it was not even there I would have been fine with it. It was sweet but I did not feel the great passion. Readers who are looking for something different to read may be interested to check out this book.
Lauren L. Garcia