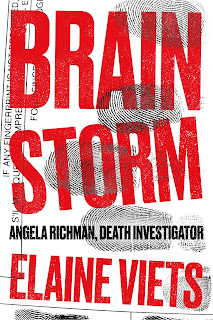 The ultrawealthy families of Chouteau Forest may look down on a woman like death investigator Angela Richman, but they also rely on her. When a horrific car crash kills a Forest teenager, Angela is among the first on the scene. Her investigation is hardly underway, however, when she suffers a series of crippling strokes. Misdiagnosed by the resident neurologist, Dr. Gravois, and mended by gauche yet brilliant neurosurgeon Dr. Jeb Travis Tritt, Angela faces a harrowing recovery.

It’s a drug-addled, hallucinating Angela who learns that Dr. Gravois has been murdered…and the chief suspect is the surgeon who saved her life. Angela doesn’t believe it, but can she trust her instincts? Her brain trauma brings doubts that she’ll ever recover her investigative skills. But she’s determined to save Dr. Tritt from a death-row sentence—even if her progress is thwarted at every turn by a powerful and insular community poised to protect its own.

Another new to me author. I am actually glad that Angela had to cope with her situation. It brought me closer to her and made me see her as a real person and not just a character in a story. There were a few stumbling blocks along the way with Angela as she did not always come off as confident in her skills and knowledge. Yet, she is able to keep a clear head. I expect that in the next book I will see Angela grow stronger.

If you like a good mystery story with good characters and writing than you should check this book and series out. Plus, the blood and gore count is low. So even cozy mystery readers would enjoy this book. I am so glad that the author survived her own experience with her strokes. Because the author gave these same experiences to Angela, it brought more life to her. I look forward to checking out the next book in this series.
Elaine Viets