Twice Upon an Apocalypse 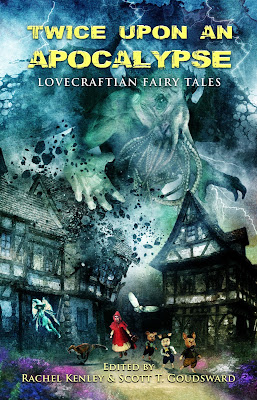 These aren't your mother's fairy tales.
Throughout history parents have told their children stories to help them sleep, to keep them entertained. But we're pretty sure none of those parents had this in mind. These are the fairy tales that will give you and your children nightmares. From the darkest depths of Grimm and Anderson come the immortal mash-ups with the creations of HP Lovecraft.
The stories in Twice Upon an Apocalypse will scare and delight “Children” of all ages!
With stories by William Meikle, Peter N. Dudar, David Bernard, Armand Rosamilia, J .P. Hutsell, Zach Shephard, Bracken MacLeod, Simon Yee, Inanna Arthen, Michael Kamp, Scott T. Goudsward, Pete Rawlik, Winifred Burniston, Mae Empson, Matthew Baugh, C.T. Phipps, KH Vaughan, Sean Logan, Thom Brannan, Morgan Sylvia, and Don D’Ammassa.
Introduction by Gary Braunbeck
“The Pied Piper of Providence” by William Meikle
“The Three Billy Goats Sothoth” by Peter N. Dudar
“Little Maiden of the Sea” by David Bernard
“The Great Old One and the Beanstalk” by Armand Rosamilia
“In the Shade of the Juniper Tree” by J .P. Hutsell
“The Horror at Hatchet Point” by Zach Shephard
“The Most Incredible Thing” by Bracken MacLeod
“Let Me Come In!” by Simon Yee
“The Fishman and His Wife” by Inanna Arthen
“Little Match Mi-Go” by Michael Kamp
“Follow the Yellow Glyph Road” by Scott T. Goudsward
“Gumdrop Apocalypse” by Pete Rawlik
“Curiosity” by Winifred Burniston
“The Ice Queen” by Mae Empson
“Once Upon a Dream” by Matthew Baugh
“Cinderella and Her Outer Godfather” by C.T. Phipps
“Donkeyskin” by KH Vaughan
“Sweet Dreams in the Witch-House” by Sean Logan
“Fee Fi Old One” by Thom Brannan
“The King on the Golden Mountain” by Morgan Sylvia
“The Legend of Creepy Hollow” by Don D’Ammassa​

Calling all horror fans. You have to check this anthology out. This book is chalked full of twisted fairy tales. The best part is that they are not full of zombies, which one might instantly think with the word "apocalypse" in the title. No these stories have demons, massacre, blood, and guts. All the ingredients of nightmares. There are so many good stories that I enjoyed. This is a bonus. There is nothing worse then reading a book full of short stories only to find that more than half of the stories are bad. Although, my favorite is probably “Let Me Come In!” by Simon Yee. It is a new take on the classic, The Three Little Pigs. In this story, the wolf is armed with grenades and a rocket launcher. Yet, the pigs are not defenseless. I dare you to pick just one story you like in this book. Now, what are you waiting for...go pick up a copy.