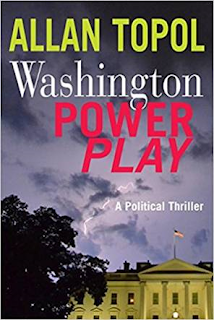 What does FBI agent Kelly Cameron’s college sweetheart, the dashing Xiang Shen, have to do with her latest case? As Cameron digs deeper into China’s influence on the presidential race, Shen’s romantic overtures might not be quite what they seem. What does this Chinese diplomat have to do with the influence of a foreign power on a national election? And who is targeting Cameron and her daughter?


In Allan Topol’s inimitable style, WASHINGTON POWER PLAY spins a tale of international intrigue, deception, and corruption at the highest levels of power.
Kelly Cameron has just thwarted a terrorist attack on the Walter Reed Medical Center in Washington, and is now in charge of a task force to find a mole in the U.S. government. She soon finds evidence of a plot initiated by the Chinese government supporting General Darrell Cartwright to promote his election as the president of the United States.

Cameron’s efforts to thwart this plan are hindered by Shen, and Andrew Martin, a powerful Washington lawyer who has strong ties to the Chinese. At stake in this Washington power play is nothing less than the global balance of power.

I was intrigued to check out this book. It is one that is right up my alley. I started reading it going along just fine. Kelly is a good female lead character. Yet, for some reason, no matter what I just could not fully commit to the story or the characters. In the beginning, there was a lot of conversation and not a lot of action. As I got further into the story, however, it did pick up some. The storyline is believable. However, I struggled a lot with this book. I would read a few pages to chapters and then put the book down. This went on for a while. Some of the characters had a built relationship from prior novels. In this case, I think that was part of what was missing for me is that established relationship that would have been formed had I read the prior novels. While, this book did nothing for me, I did experience some things that I did like about this book that would have me trying this author again.