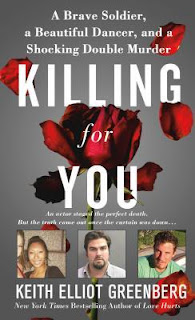 A KILLER PLOT
Twenty-six-year-old actor Daniel Wozniak was unemployed, facing eviction, and deep in debt for his upcoming wedding. So he devised a diabolical plan: He asked his neighbor Sam Herr, a young war veteran, to help him move some things into the attic of an empty theater. There, Wozniak shot Herr twice in the head before taking his ATM card and cell phone. Hours later, Wozniak performed on stage with his fiancee in a local production of the musical Nine, convinced that he had gotten away with murder...

A DRAMATIC LAST ACT
Wozniak dismembered his victim's body and hid the pieces. Then he lured Herr's college friend Juri "Julie" Kibuishi to Herr's apartment and shot her twice in the head. The police immediately declared Herr a prime suspect--just as Wozniak had planned. But when Herr was declared missing, and his ATM withdrawals led authorities to Wozniak at his bachelor party, the actor was forced to play the role of a lifetime in a shocking murder investigation that would be his greatest--and final--performance...

I vaguely remember hearing about this case. The most mind boggling part of this whole case was not the act of the crimes but Daniel's demeanor towards the whole situation. He acted as if he was playing a part in a show, even when Mr. Greenberg went to visit him in prison. How, someone can be so distinct about taking innocent lives is mind boggling. Yes, Daniel did it for the money but in the end he really did not end up with a lot of money.

The way that Sam's military buddies bonded with his parents was sweet. Yet, on the other hand, I also saw the downside to a murder. For example, the theater where Daniel starred in; received so much bad publicity that the owners had to shut it down. You don't really think of all of the ripe effects a murder has on everyone involved. Mr. Greenberg did a very good job writing this book. I did not feel like anything was unbalanced in the details. Fans of true crime will enjoy this book.
Keith Elliot Greenberg