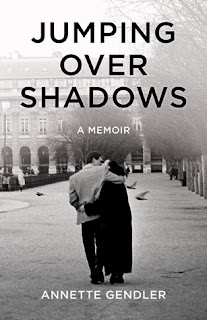 History was repeating itself when Annette Gendler fell in love with a Jewish man in Germany in 1985. Her Great-Aunt Resi had been married to a Jew in Czechoslovakia before World War II--a marriage that, while happy, created tremendous difficulties for the extended family once the Nazis took over their hometown in 1938, and ultimately did not survive the pressures of the time. Annette and Harry's love, meanwhile, was the ultimate nightmare for Harry's family of Holocaust survivors.
Weighed down by the burdens of their family histories, Annette and Harry kept their relationship secret for three years, until they could forge a path into the future and create a new life in Chicago. As time went on, however, Annette found a spiritual home in Judaism--a choice that paved the way toward acceptance by Harry's family, and redemption for some of the wounds of her own family's past.

I enjoyed reading about the author's live back in the 80's and how she fell in love with a Jewish man. While, I did appreciate the author showing comparisons to her and her great Aunt's lives; I did find that it was not always a similar path. In fact, I kind of wished that there was not so much comparison mentioned throughout the book. I enjoyed reading the book and just getting to know the author.

There was a section in the book about a third of the way in, where the author talks about her great Aunt and how she fell in love with a Jewish man. Again, while, I did like reading about Resi, I felt like the story kind of stopped for a bit in the flow before it picked up again with the author. The pictures in this book are a nice addition. Overall, I did like this book and it made for an good read. Fans of memoirs will be happy with this book and is worth checking out.
Annette Gendler