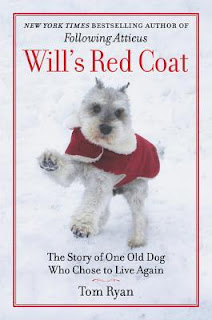 A true story of acceptance, perseverance, and the possibility of love and redemption as evocative, charming, and powerful as the New York Times bestseller Following Atticus.

Drawn by an online post, Tom Ryan adopted Will, a frightened, deaf, and mostly blind elderly dog, and brought him home to live with him and Atticus. The only owners Will ever knew had grown too fragile to take care of themselves, or of him. Ultimately, Will was left at a kill shelter in New Jersey.

Tom hoped to give Will a place to die with dignity, amid the rustic beauty of the White Mountains of his New Hampshire home. But when Will bites him numerous times and acts out in violent displays, Tom realizes he is in for a challenge.

With endless patience and the kind of continued empathy Tom has nurtured in his relationship with Atticus, Will eventually begins to thrive. Soon, the angry, hurt, depressed, and near-death oldster has transformed into a happy, gamboling companion with a puppy-like zest for discovery. Will perseveres for two and a half years, inspiring hundreds of thousands of Tom and Atticus’s fans with his courage, resilience, and unforgettable heart.

A story of a dog, a family, and an indelible bond that is beautiful, heartbreaking, uplifting, and unforgettable, Will’s Red Coat honors the promise held in every living creature, at any stage of life.

For anyone who is a dog lover, you will fall in love with Will. Although, Will may be the star of this book, I fell in love with Atticus, Tom, and Aragorn as well. I absolutely loved that Mr. Ryan decided to take a chance on Will. I could understand his hesitation in the beginning after meeting Will and wanting to give him back. A lot of people would have done so. Yet, I think the reason that Will fought so hard and lived was because he had finally experienced what true love was with Mr. Ryan and Atticus. If you asked Atticus he would not admit it out loud that he did love Will as well.

It was easy to see how people became so inspired by Will. He was such an admirer of flowers. I knew going into this book that I was going to find myself crying but I did not realize just how overcome with emotions I would get when Will's time had come. The moments with Will surround by a house full of flowers, Aragorn saying good bye to Will, the one last mountain top hike, and the last rose flowing down the river. A must read for all dog lovers. Yet, be prepared to have the tissues ready.
Tom Ryan