It's Always the Husband 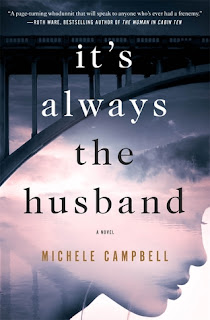 Kate, Aubrey, and Jenny first met as college roommates and soon became inseparable, despite being as different as three women can be. Kate was beautiful, wild, wealthy, and damaged. Aubrey, on financial aid, came from a broken home, and wanted more than anything to distance herself from her past. And Jenny was a striver—brillliant, ambitious, and determined to succeed. As an unlikely friendship formed, the three of them swore they would always be there for each other.

But twenty years later, one of them is standing at the edge of a bridge, and someone is urging her to jump.

How did it come to this?

Kate married the gorgeous party boy, Aubrey married up, and Jenny married the boy next door. But how can these three women love and hate each other? Can feelings this strong lead to murder? When one of them dies under mysterious circumstances, will everyone assume, as is often the case, that it’s always the husband?

A suspenseful, absorbing novel that examines the complexities of friendship, It’s Always the Husband will keep readers guessing right up to its shocking conclusion.

This is one of the books that I was really looking forward to reading. Yet, I was lucky to just get a third of the way into the story. None of the three women were appealing, especially Kate. She came off as a self-centered bitch. Actually, I felt for her in the beginning seeing how her family treated her and wanted to give her the benefit of the doubt but that is not how the story was leading. Jenny was not much of a friend. It was like she matured and wanted to forget about her college years. Aubrey lived in denial. Even when she was faced with facts, she did not react. The husband in question is a douche. Whatever may have happened to him if anything he deserved it. I so wanted to know what happened back in the past that lead to the present but try as I might, I could not ignore how unlikeable the women were. I guess I will just be kept guessing what the shocking conclusion was.
Michele Campbell