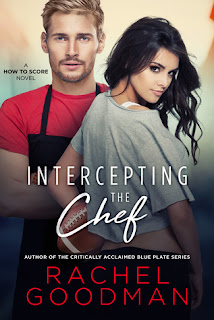 Gwen Lalonde is a rising star in the eyes of the elite restaurateurs of the world. But when her celebrity chef boss and now ex-boyfriend fires her, she finds herself playing a different game. Forced to flee San Francisco and return home to Denver, Gwen lands a spot as the executive chef at Stonestreet’s, a new restaurant owned by NFL golden boy and Colorado Blizzards quarterback Logan Stonestreet. When Logan starts pursuing Gwen romantically, she pulls a classic duck and weave and avoids any advances by throwing herself into reestablishing her reputation in Denver.

But Logan Stonestreet is persistent—he didn’t become one of the best football players in the league by throwing in the towel at the first rejection. Something about Logan’s unwavering determination—and amazing body—keeps Gwen around, and soon there’s more that’s sizzling than just the steak on the grill. Things are getting more serious than either side cares to admit, and when Logan suffers a severe injury in the playoffs, they’re both forced to make game-time decisions. The perfect romance for football fans and foodies alike, Intercepting the Chef is a delicious read that’ll have you hooked until the very last play.

This is a sweet read. I would not say that I was jumping for joy over it. In regards, to the foodie aspect of this book, it was good. I wished that the descriptions of the dishes that Gwen made were more descriptive. Details are everything when it comes to foodie books. They can make me the reader be transported with all of the savory dishes and leave my mouth watering. I did not experience this.

Although, I must admit that the food was the second reason I wanted to check this book out. The first being the word "Colorado". I can't help myself when I hear this word as I live in Colorado. I feel loyalty to have to check out a book or an author who is from Colorado or resides in the state.

Logan is not one of those ego-manic athletes. He is a nice guy. He may be over his head owning a restaurant but luckily he has Gwen. Yet, I do wish that after Gwen saw how much of a nice guy Logan is that she would have given him a little more slack. Yet, I kind of understand where she was coming from as she was dumped in a harsh way in her last relationship. Not a fan favorite but I am interested to see what the next book in this series is all about.
Rachel Goodman