A Speck in the Sea 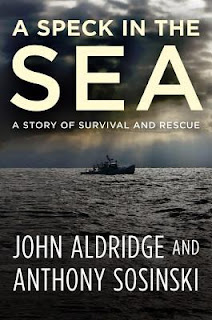 In the dead of night on July 24, 2013, John Aldridge was thrown off the back of the Anna Mary while his fishing partner, Anthony Sosinski, slept below. Their memoir, A Speck in the Sea intertwines Aldridge's wrenching first-person account with the narrative of the massive, constantly evolving rescue operation designed to save him. As desperate hours tick by, Sosinski, the families, the local fishing community, and the U.S. Coast Guard in three states mobilize in an unprecedented search effort that culminates in a rare and exhilarating success. A tale of survival, perseverance, and community, A Speck in the Sea tells of one man's struggle to survive as friends and strangers work separate, and together, to bring him home.

I thought this was an interesting read. If nothing else, it was a fast read. Yet, I found that I wanted more. There was a lot of focus of the story spent on the numerous search and rescue efforts. What I was hoping for was that equal amounts of focus was spent on John's point of view as he was awaiting rescue. Although, I did find it interesting and could see how it was an easy mistake on the original search area as John was supposed to wake up Anthony for the next watch. Therefore, with John falling overboard, it was hard for Anthony to pin point at what time John fell overboard. It was great seeing how the community came together in the search efforts. Additionally, I learned some things about the Coast Guard. A good read.
Anthony Sosinski John Aldridge