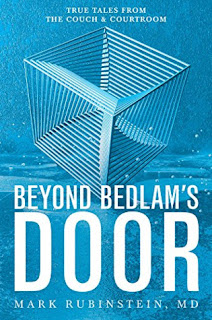 What drove a psychiatrist to enlist a patient in a plot to murder six people? What was the secret bargain struck that allowed a 104-year-old woman to live such a long and productive life?

Why would a woman refuse to emerge from the confines of her bedroom? And after treatment liberated her, why did she suddenly take a turn for the worse?

In Beyond Bedlam's Door, former practicing psychiatrist Mark Rubinstein takes you outside the hospital and into his world of private patients, nursing home residents, and the challenging legal system in which he worked as a forensic expert. As in Bedlam's Door, great lengths were taken to preserve people's anonymity, but the raw truth of each story remains intact. The resiliency of some individuals and the venality of others are laid bare in these pages.

Beyond Bedlam's Door invites you to meet twenty-one unforgettable people. Some stories will disturb you, others will make you smile, but all will give you a deeper appreciation of what it means to.

This is the second book I have read from this author. The first book, Bedlam's Door was an intriguing read. It is still kind of hard to believe some of the stories I read in that book. Therefore, I was very intrigued to further read more interactions that Dr. Rubinstein has had with some of his patients or other patients that his colleagues have encountered.

Some of the stories could be a storyline for Law & Order. In fact, they probably have already been done. Although, not all stories are like that. There is the story titled "Remembrance of Things Past" of a loving elderly couple. The husband has Alzheimer's disease. The wife cares for her husband through the good and bad days, knowing that one day her husband will no longer be there. Dr. Rubinstein goes on to explain the different types of dementia in a understandable way.

Another story that really stuck with me was titled "The Arrangement". A woman named Ina, who was 101 and a centenarian. She was living at an atrium. She was still sharp minded. Dr. Rubinstein asked Ina about her secret to longevity. Ina responded that her mother lived until she was thirty seven but she always thought her mother made an arrangement with God that Ina could have her mother's missing years. It is stories like this and the others in this book that make you really look at the human side of all varieties of people.
Dr. Mark Rubinstein