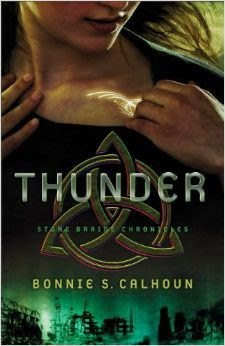 The Time of Sorrows is long past.
The future of Selah and her people is shrouded in mystery.
And the clock is ticking.
Hidden in the tall grasses along a shore littered with the rusted metal remnants of a once-great city, a hunter crouches. It is the eve of her eighteenth Birth Remembrance and high time she proves to herself and her brothers that she can stand on her own two feet. Selah Rishon Chavez waits not for game but for one of the small boats that occasionally crash against the desolate shoreline. Because inside one of these boats she will find her quarry--a Lander.

These people from an unknown land across the ocean are highly prized by the Company and bring a good price--especially if they keep the markings they arrive with.

Everything falls to pieces when the Lander whom Selah catches is stolen by her brothers, and Selah wakes the next morning to find the Lander's distinctive mark has appeared on her own flesh. Once the hunter, Selah is now one of the hunted, and she knows only one person who can help her--Bodhi Locke, the Lander her brothers hope to sell in the Mountain.

With evocative descriptions of a strange new world that combines elements of disturbing scientific advances, devious political conspiracy, and survival in a hostile wilderness, Bonnie S. Calhoun weaves a captivating tale of a society more like our own than we may want to admit. From the tension-laced first scene to the captivating last page, Thunder is an epic journey into the heart of humankind that explores how far we are willing to go when we're pushed to the limit.

Bonnie S. Calhoun loves to write, but it doesn't make her happy unless there are the three Bs: body count, blood, and blowing things up. She also has mad skills at coding HTML and website design. Bonnie lives in a log cabin in the woods with fifteen acres and a pond full of bass. But she'd rather buy fish, ready to eat and under plastic, at the grocery store. She shares her domain with a husband, a dog, and two cats, all of whom think she is waitstaff.

To see an exclusive video trailer and to get more information on the Stone Braide Chronicles, go to www.BonnieSCalhoun.com.

This is the first book I have read by this author. I decided to take a chance and go outside of my reading norm. I have to say that I did not like this book. The people, places and events did not seem real to me. This book reads like a nightmare that does not relate to real life here in the civilized country or the scientific world. I could not relate to the characters in this book as they were not really living in real life.

There was very little honesty and love with the characters or between them. However the author did bring Selah and her family together. We live in a fallen world but as we take God's world it becomes a reality that each one of us have issues in our own family to work out according to his plan. He has a plan for each and every life as we submit to his authority it comes real. The ending of the story does bring together all of the characters in a bond of fellowship.