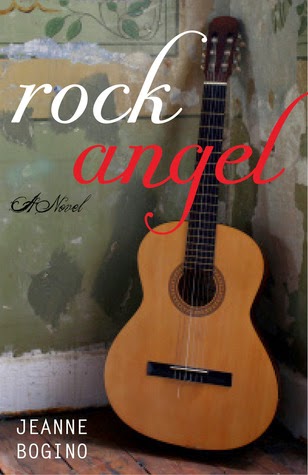 Shan is young, beautiful, talented, and addicted to heroin in Rock Angel, a novel that follows her meteoric rise to guitar goddess stardom in the 90’s. She is discovered in New York by a handsome, arrogant musical genius named Quinn, and sparks fly between them when he hires her as lead guitarist of his band. Although Quinn is accustomed to bedding a different groupie every night, he can’t ignore his deepening feelings for his new band mate. From gritty Greenwich Village clubs to L.A.’s Troubadour; gigging and touring the country to the cover of Rolling Stone, Rock Angel is infused with the passionate music and intense sexual chemistry of Shan and Quinn. Shan must work out her personal demons and learn to trust Quinn enough to love him, but still remain true to the music that has always been her salvation. A hot, hard-driving story set in an intoxicating world of sex, drugs, and rock n’ roll, Rock Angel is the first novel by author, Jeanne Bogino.

Shan wouldn’t have an iPod, not back in 1990, but she’d have a Walkman! Here’s her ideal mixed tape.
“My music will tell you a lot more about me than my mouth ever could.” – Unknown


Shan might finally get her big break. She is auditioning for the new guitar player for the band, Quinntessence. She gets the gig. She is the only female in the band. It is not bad except that she is distracted by heroin and another type of drug called Quinn. Who the band is named after.

The author did do a job of bring the rawness to her characters. This is not pretty. It is more at times like pretty ugly. In that the truth will set you free but it also brings with it demons and skeletons from your closet. I had mixed feelings about the relationship between Shan and Quinn. It did seem like the author wanted them to hook up but I was not so feeling the love with then unless it was more like a love/hate relationship or a friend relationship. Quinn came off as such a player. I mean in the beginning he was all about Shan but he was not man enough to say anything and instead would hook up with a different women. Unattractive. Shan definitely acted her age as well in situations. She was sixteen and still a teenager. Although the rest of the cast was fine. I didn't really have any issues with them. This book is so much more than just music. It is about emotions.
Jeanne Bogino