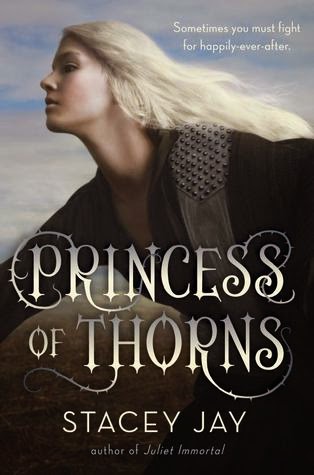 Game of Thrones meets the Grimm's fairy tales in this twisted, fast-paced romantic fantasy-adventure about Sleeping Beauty's daughter, a warrior princess who must fight to reclaim her throne.

Though she looks like a mere mortal, Princess Aurora is a fairy blessed with enhanced strength, bravery, and mercy yet cursed to destroy the free will of any male who kisses her. Disguised as a boy, she enlists the help of the handsome but also cursed Prince Niklaas to fight legions of evil and free her brother from the ogre queen who stole Aurora's throne ten years ago.

Will Aurora triumph over evil and reach her brother before it's too late? Can Aurora and Niklaas break the curses that will otherwise forever keep them from finding their one true love?

Score. Princess of Thorns is a magical, adventure that will suck readers in for a wonderful journey ride that will leave them craving more of Aurora and Niklaas!

Right from the beginning, I was captivated by Aurora. She is a warrior. I like stories of women who are strong and independent. She and Niklaas were good. I can't say that they hit it off right away as Aurora was more of the leader than Niklaas. Although as the story progressed, Niklaas grew stronger as well. The romance between Aurora and Niklaas was almost non-existant, except for the last third of the book. This is because for more of the story Niklaas was under the impression he was helping Aurora's brother. I was a little sad when I finished this book. I wanted it to continue. I would love to see Aurora and Niklaas again in the future.