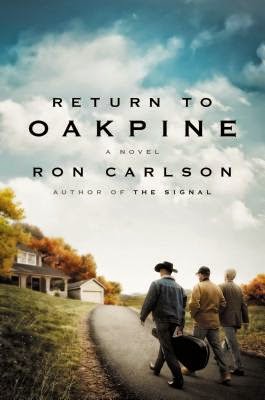 From a widely admired author, a poignant novel about homecoming, friendship, growing up, and growing old for fans of Richard Ford and Richard Russo

In this finely wrought portrait of western American life, Ron Carlson takes us to the small town of Oakpine, Wyoming, and into the lives of four men trying to make peace with who they are in the world.

In high school, these men were in a band. One of them, Jimmy, left Oakpine for New York City after the tragic death of his brother. A successful novelist, he has returned thirty years later, in 1999—because he is dying.
With Carlson’s characteristic grace, we learn what has become of these friends and the different directions of their lives. Craig and Frank never left; Mason, a top lawyer in Denver, is back in town to fix up and sell his parents’ house. Now that they are reunited, getting the band back together might be the most important thing they can do.

Return to Oakpine is a generous, tender look at friendship, family, and the roads not taken, by a writer at the peak of his craft.

This is a fast read but in this case this is not a good thing. Fast because I was going through the motions but not rememberable. I got about half way into the book. Which I stopped at chapter 6. Yes, this is a shorter book then my usual reading at 264 pages. Anyways, I went to pick up this book again to start reading it and promptly put it back down after a page and a half. The reason for this is because I could not remember anything that happened in the first five chapters/half of the book. None of the characters were engaging with their back stories. I did see some brief glimmer of promise that this book could be good but maybe for someone else.
Ron Carlson