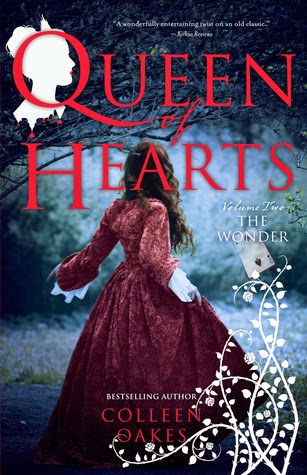 An Exiled Princess. An Ancient Tribe. A Dangerous Stranger with Unknown Loyalties.
Dinah, the former Princess of Wonderland Palace, has been chased into the wilds of Wonderland after the brutal murder of her brother and the ruin of her impending crown. Now, as her half-sister Vittiore sits on the throne beside her Father, the brutal King of Hearts, Dinah finds herself alone in the forbidding Twisted Wood with only Morte, a homicidal beast, for company.

Hunted by the King and his army of Cards, Dinah struggles to evade those who long for her head, including Cheshire, the King’s clever advisor, who is slowly tightening his grasp around her. Spurred on by her rising terror, the former Princess finds herself at the center of a web of conspiracy reaching far beyond the Palace and deep into the mysterious Yurkei mountain tribes.

Even with the balance of an entire Kingdom at stake, Dinah knows something that her allies and enemies do not: that the most dangerous conflict of all has already begun as she battles the rage that beckons her ever closer as love slips further from her grasp.

The second book in the bestselling and award-winning Queen of Hearts Saga, The Wonder takes readers back to the most wondrous and curious places in Wonderland, and continues this darkly addictive tale featuring one of the most infamous villains of all time.
But be warned…not every fairy tale has a happy ending.
This is the story of a princess who became a villain.

My Review
This is the second book in this trilogy. While I have not read the first book or even heard of this series, I was able to jump right in with both feet. In fact, I enjoyed this book so much that I had to slow myself down some so that I could try to make it last longer. I have read several takes on the story of Alice in Wonderland and I have to say that this is my favorite thus far. It has just the right amount of dark, sinister goodness and it is different enough from the original that I don't make any comparisons. Now, while I wait for book three I have to go back and read book one. Also, I liked that some of the bad guys were good and visa versa. Also that the main characters in the story were not the main featured ones in this book. For example it was cool to get to know more about the deck of cards and Dinah is growing strong. I can't wait for the big battle to happen.
Colleen Oakes