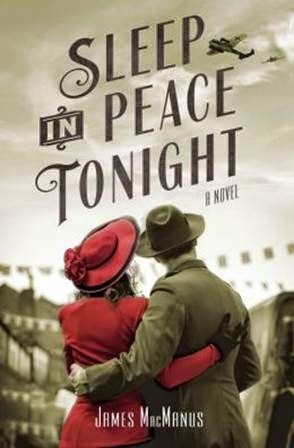 "Sleep in Peace Tonight sneaks the reader behind the curtain of the grand stage that became the Second World War. James MacManus's meticulous research breathes life into historical figures that largely shaped our current world. Through its political and personal complexities, the story serves as a reminder of the victories, losses, and sacrifices that were made on every front."

—  Kristina McMorris, bestselling author,
The Pieces We Keep
Readers will savor this breathtaking ride that is both a heady, heartbreaking romance and a chance to witness this critical moment in history from the shoulders of giants – fantastic!"
— Pam Jenoff, The Kommandant’s Girl
“…a poignant love story, rich in historical detail and captivating characters caught up in the vortex of a world on the brink of destruction.”
—  Douglas W. Jacobson, Night of Flames
SLEEP IN PEACE TONIGHT
By James MacManus
It’s 1941 and a madman named Adolf Hitler is on a mission to invade Great Britain. The constant sound of bomb blasts followed by the stench of flaming homes and buildings are a part of everyday life in London during the Blitz. The threat that the Nazi’s next stop will be on American soil hangs in the sooty air.
SLEEP IN PEACE TONIGHT (Thomas Dunne Books; October 7, 2014; $25.99) is author James MacManus’ newest historic novel set in war-torn London. President Franklin Delano Roosevelt dispatches his most trusted advisor, a tall, gaunt man named Harry Hopkins, to
London to meet with Winston Churchill. There, Hopkins must assess the growing crisis in Britain. The White House is conflicted and many of FDR’s advisors oppose America joining forces with Britain. During his many meetings with the Prime Minister, Hopkins is bombarded by Churchill’s dramatic rhetoric and constant drinking. Churchill knows the only way to save Britain is with help from the United States. During a dinner in Glasgow, Scotland Churchill implores Hopkins to tell FDR to “give us the tools and we will finish the job.”
In his latest novel, MacManus paints a stunning portrait of a battered London with larger-than-life personalities from history and a mysterious love interest that work together to change the course of history. During his travels in Great Britain, Hopkins is assigned a beautiful young driver named Leonora Finch. The two find consolation in each other’s arms from the threat of war. Hopkins falls deeply in love and the couple’s passion artfully unfolds on the pages. While in London, Harry and Leonora befriend veteran CBS newsman Edward R. Murrow who frequents a secret nightclub named the Black Cat Club that features an unusual mix of colorful characters.
As Harry and Lenora grow closer, she confides that she’s a member of a secret British spy agency. Leonora craves wartime action and will stop at nothing to prove she should be on the front lines, even if it means risking her life.
SLEEP IN PEACE TONIGHT takes readers on an exciting and heartbreaking adventure as they follow two star-crossed lovers on an epic journey. MacManus brings to life an expertly researched and tragic tale of courage, loyalty and passion and spotlights the sacrifices they make in the name of love and loyalty.

JAMES MACMANUS is the managing director of The Times Literary Supplement. He is the author of Ocean Devil, which was made into a film starring Jonathan Rhys Meyers. His other novels include The Language of the Sea and Black Venus. www.jamesmacmanus.com
###
Sleep in Peace Tonight
By James MacManus
Thomas Dunne Books;
$26.99 U.S./$31.00 CAN.
ISBN: 978-125-001-1423-8

In spite of the whisky and the long journey, Hopkins found sleep difficult that night. He had been shocked by the earsplitting cacophony of guns, bombs, and sirens during the raid. News reports from London all talked of civilian deaths, the destruction of homes, the plight of the homeless, food shortages, rationing, queues, but none mentioned the deafening nightly thunder of the Blitz. He wondered how anyone got any sleep.

The next morning, as his car drove down Park Lane to 10 Downing Street, he realized that sleep was probably a dimly remembered luxury for most Londoners. Despite the cold, he wound the window down and caught the acrid smell of smoke and burning. He saw pale faces pinched with cold waiting patiently at bus stops, trying to get to work. People stamped their feet and rubbed gloved hands against the cold, craning around the queue hoping to see their bus. Others gave up the wait and trudged past still- burning buildings, heads down, hands clasping handbags or briefcases, all wondering on that freezing morning whether there would be transport home that night. They looked exhausted, hollowed out, half people.

Red double- decker buses lumbered over still- smoldering rubble strewn across the roads, weaving past piles of shattered brick and occasional geysers of water as they went from bus stop to bus stop scooping up passengers from long, orderly queues.

As they passed Hyde Park Hopkins saw the antiaircraft crews cleaning and servicing the guns for the night ahead. Piles of expended shell cases were stacked neatly in brass pyramids under the plane trees. Elderly men and women walked dogs around the gun emplacements as if it were normal to find batteries of long- barreled 3.7- inch antiaircraft guns in the middle of a city park.

That’s the point, Hopkins realized. This is normal. The Blitz had been going on for four months. Twenty- eight thousand people had been killed in London alone and forty thousand homes destroyed, leaving almost half a million people displaced. And yet here on the streets on a bitter January morning people were queuing for the bus and trudging to work over the debris from the latest raid. The chargé d’affaires had been right. No one in Washington had any idea of what was happening in London.

Hopkins opened his briefcase and pulled out his letter of authorization from President Roosevelt:

Reposing special faith and confidence in you, I am asking you to proceed at your earliest convenience to Great Britain, there to act as my personal representative. I am also asking you to convey a communication in this sense to His Majesty George VI. You will of course communicate to this government any matters which may come to your attention in the performance of your mission which you may feel will serve the best interests of the United States.

With all best wishes for the success of your mission I am,