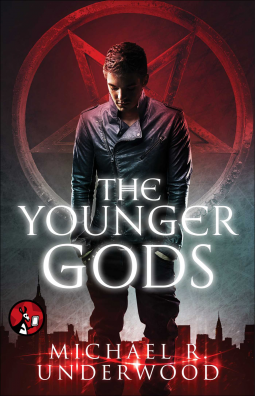 The first in a new series from the author of Geekomancy (pop culture urban fantasy) and Shield and Crocus (New Weird superhero fantasy).

Jacob Greene was a sweet boy raised by a loving, tight-knit family…of cultists. He always obeyed, and was so trusted by them that he was the one they sent out on their monthly supply run (food, medicine, pig fetuses, etc.).

Finding himself betrayed by them, he flees the family’s sequestered compound and enters the true unknown: college in New York City. It’s a very foreign place, the normal world and St. Mark’s University. But Jacob’s looking for a purpose in life, a way to understand people, and a future that breaks from his less-than-perfect past. However, when his estranged sister arrives in town to kick off the apocalypse, Jacob realizes that if he doesn’t gather allies and stop the family’s prophecy of destruction from coming true, nobody else will.
My Review
Jacob Greene came from a cult. He escaped and his trying to make a new life for himself at St. Mark's University. So far Jacob is learning it is harder to make friends than it was living in a cult. Jacob hears on the news of a murder. The body was surrounded by a circle that was burned with ashes. The murder can mean only one thing...Jacob's family has found him. Jacob knows that the murder is just the beginning. It is a ritual to being doom to the Earth.

I had issues with this book. At times it read like the author did not think the readers (me) would get the concept of the story, so he would write things out sometimes repeating. Then at other times he did not explain enough and it felt like he was just rushing through the story. Another problem I had is that I wanted the characters to be more engaging. I found them to be uninteresting and not so likeable. Like I did not really felt like Jake was all that interested or cared about sharing people. He was his persona. He came off stiff and a little cold. I did understand his reservation with people and making friends due to his one and only friend being killed by his family. Yet, I wanted him to be more warm and inviting. Despite all of this I did find myself skimming parts after a while. The cult rituals and other magical elements in the book were not bad. I did see some promise of a good book.
Michael R. Underwood