See How Much You Love Me: A Troubled Teen, His Devoted Parents, and a Cold-Blooded Killing 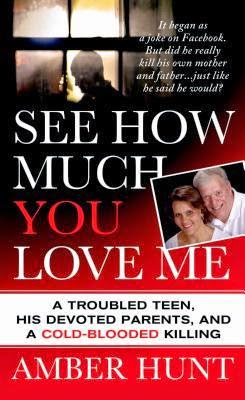 “I KILLED MY PARENTS.”
Seventeen-year-old Tyler Hadley posted an invitation on Facebook: party at my crib tonight. But this was no ordinary house party in the Florida suburbs; it was a grisly crime scene. Later that night, Tyler revealed to his best friend, Michael, that he’d bludgeoned his parents to death with a hammer. Michael didn’t believe him…until he entered the master bedroom and saw the bodies of Tyler’s parents on the floor—murdered, beyond the shadow of a doubt.

Mary Jo and Blake Hadley had always known their son had a dark side. He would make disturbing jokes about murder on Facebook. He apparently idolized the infamous Menendez brothers, who murdered their parents for money. But how could they have known their son was dead serious? What kind of person could kill his mother and father, throw a party with their bodies in the next room, and brag about it? This riveting account by an award-winning journalist takes you deep inside the mind of a troubled teenager—and behind the scenes of a true American nightmare…

I can't rightly say that I am familiar with Tyler Hadley's case. Of course, this was several years ago. So I might have read about it and have since forgotten about it.  What Tyler did is pure evil. I can not imagine the terror that his parents went through as their son beat them to death. Which is was horrible in itself but the worse part I think was that Tyler hosted a party at his house and piled all of the house hold items on top of his parents dead bodies. This is what really got to me about the murders. Then there was the way that Tyler spoke as if he was disconnected with the crime he committed.

I think Tyler's friend, Michael brought up a good point. It was not just the loss of two innocent lives that was bad but that it affected so many people...Tyler's brother, relatives, Michael, Tyler's friends, the community, and nation. The author did a good job of telling this story including the investigation process. I have read a few murder crime books and what I feel is missing is the details. It seems that the authors go into details about the murder and the trial but not enough details are spent in the investigation. This is in my eyes a very important part leading up to the trial and the verdict. This was a well written book.
Amber Hunt