Back in the Fight: The Explosive Memoir of a Special Operator Who Never Gave Up 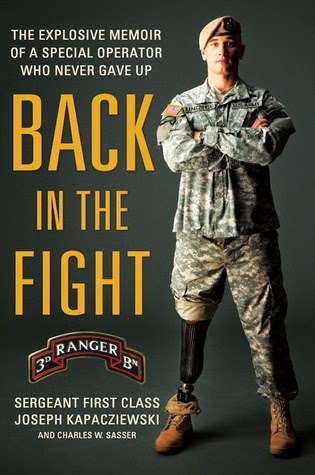 On October 3, 2005, Kapacziewski and his soldiers were coming to the end of their tour in Northern Iraq when their convoy was attacked by enemy fighters. A grenade fell through the gunner’s hatch and exploded, shattering Kapacziewski’s right leg below the knee, damaging his right hip, and severing a nerve and artery in his right arm.

He endured more than forty surgeries, but his right leg still wasn’t healing as he had hoped, so in March 2007, Kapacziewski chose to have it amputated with one goal in mind: to return to the line and serve alongside his fellow Rangers. One year after his surgery, Kapacziewski accomplished his goal: he was put back on the line, as a squad leader of his Army Ranger Regiment.

On April 19, 2010, during his ninth combat deployment (and fifth after losing his leg), Kapacziewski’s patrol ran into an ambush outside a village in eastern Afghanistan. After a fellow Ranger fell to withering enemy fire, shot through the belly, Sergeant Kap and another soldier dragged him seventy-five yards to safety and administered first aid that saved his life while heavy machineguns tried to kill them. His actions earned him an Army Commendation Medal with “V” for Valor. He had previously been awarded a Bronze Star for Valor—and a total of three Purple Hearts for combat wounds.

Who doesn't love a good hero story. I know I do. What makes the hero even better is that he is a real person and not a fictional character in a book or movie. Plus, this hero is helping to fight for our country and freedom! This hero's name is Sergeant First Class Joseph Kapacziewski. He not only has dedicated his life to his country but he has lost a leg for it. Anytime that you think you have it bad or are feeling bad, you just need to think of the men and women fighting like Sergeant First Class Joseph Kapacziewski. You will feel better instantly.

Kap really gives the meat of war. He holds nothing back. Which can translate to some strong language. So if you are offended this is your warning. War is not pretty. I actually wish that more people were educated in what really goes on in war. This way people would feel proud to be an American and be respectful to the flag and service men and women. I know I am and I was not even born in America. I was lucky enough to be adopted by loving parents from South Korea. Anyways back to the book. Kap explains a little history behind the Rangers, which I found interesting. What it was like being on missions. I felt like I was actually at those places and could see, hear, and feel everything. Than there was Kap's story itself. It is inspiring. Although, I got the idea that Kap would just say that he was doing his job and what he loved to do. Back in the Fight is a great military book that is worth your time and money.
Charles W. Sasser Joseph Kapacziewski