The Other Woman's House 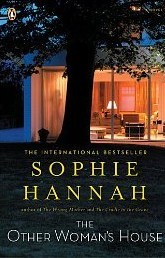 Connie Bowskill can not sleep. She decides to get up and check out check out houses for sale. Connie already knows before the website has finished loading which house she is going to look at. It is 11 Bentley Grove. Connie is obsessed with this house. Although, Connie already knows every detail about this house, she decides to take the virtual tour. The first slide is of the kitchen and then the next slide is of the lounge. This is where Connie spots her. The woman lying in a pool of blood. At first Connie can not believe her eyes. Then Connie wakes up her husband. Only when he comes to check out the computer screen, the woman’s body and the blood are both gone. Is Connie going crazy? What does this all mean?


I have seen Sophie Hannah’s books all over but I just have not had the chance to read one until now. When I read the book summary about this one, I thought it sounded intriguing and one that I had to check out. This book was intriguing and had a psychological feel to it as well that was creepy (in a good way). However after a while, I started to go tried of the slow pace the story had and flashed forward until about the last several chapters of the book. Which I did not feel like I missed anything by doing so. The last several chapters are where the whole plot was revealed. It just took a long while to get to the ending.

While, this book can be read as a stand alone novel, there was a lot of hinting to back story and history that the main characters had with each other that I felt was some what important to the story. For this reason, I do wish that I had read all the other novels in this series. What I did read from this book, I did like. I will check out more of Mrs. Hannah’s prior novels.