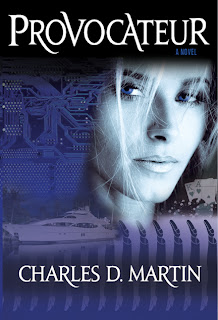 Provocateur explores that aspect of the human experience that surrounds the age-old contest between men and women. It is the story of Nadia, a young Russian woman who comes to America through a mail-order-bride program. She becomes employed in an enterprise operated by an ex-CIA agent named Olga, whose agency, through clever missions, extracts large amounts of money from wealthy men.

her “assignments” Nadia must get the best of powerful men that are at the top of the male order.

Nadia, born an orphan, rises out of a life of poverty and despair, where she had no experience with affection, to face her struggles and take on the challenges of her “profession.” She is a complex, enigmatic woman of superior intelligence who must “win” through her finesse and feminine prowess.

To me the contest between male and female members of the species is very interesting. The literature is rich with novels that look at the interaction between men and women through romance. I have chosen to look at their engagement from another viewpoint; that of the struggle of each to manage/control the other. This is a contest of skills, but an uneven matchup where the strengths that each gender brings to the playing field are very different.


This offers a literary venue to celebrate the powers that women have over men in an amusing way. Many have been surprised to see this written by a man, especially an admitted alpha male. One reviewer cited me as being a male women’s libber. That is really not true.

I don’t even like women’s libbers. They have too heavy of an agenda, one that assumes that women are subjugated to men.

a way, I believe that I am a connoisseur of women… a man that appreciates them in a very refined way. I study their attributes and examine them in great granularity. I am particularly fascinated by intelligent, independent-thinking women. I find them very interesting and sexy…regardless of their physical appearance. However, my male instincts show through in my appreciation for beauty. When I examine it closely, I see it in many dimensions. There are a wide range of ways that beauty is expressed in nature and in the female homo sapien creature. It’s not just Hollywood’s iconic version. It’s not just in the young either. As a woman ages, as she experiences the rich texture of life, she can take on a special beauty that is very different from a young woman.

That’s what interests me!

All of us men secretly know where the power lies. Perhaps it has never been said better than in a Harry Belefonte song from the 1950s.

I say let us put man and a woman together

To find out which one is smarter

Some say man but I say no

The woman got the man de day should know

And not me but the people they say

That de man are leading the women astray

But I say, that the women of today

Smarter than the man in every way

Garden of Eden was very nice

She make Adam work from that day on

Methuselah spent all his life in tears

Lived without a woman for 900 years

One day he decided to have some fun

The poor man never lived to see 900 and one


Author Bio
Charles D. Martin grew up in a small Ohio town. His parents were poor, but by working two jobs, he was able to put himself through college – he studied 5 majors (physics, mathematics, chemistry, electrical engineering and business) at Ohio State University.

Martin has been fortunate to enjoy much success in life. He had a distinguished career in venture capital and private equity, ounding two highly successful investment firms that he managed during the decades of the 1980s and 1990s. Currently he runs a hedge fund, Mont Pelerin Capital, LLC, and serves on the investment committees of prominent universities.

Martin has extensive background in finance and technology, and has travelled to the exotic locations featured in his debut novel Provocateur (August 2012). However, the novel itself is more about the intrigue in the story and the alpha female that takes on dominant males and conquers them.

Martin lives with his wife Twyla in a coastal town south of Los Angeles, California.