The Other Woman. It was fast paced, had lots of drama, and a strong female lead. 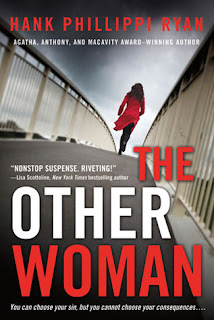 Jane Ryland was a top reporter. That is until she would not reveal one of her sources, which caused her news station to be sued for a million dollars. Now Jane finds herself starting at the bottom of the food chain. Although, Jane is not satisfied by writing fluff stories. Jane decides to do some investigation into the rumor about Senator Lassiter and his secret mistress.


Meanwhile, Detective Jake Brogan has two bodies. Both women who have been found near bridges. He does not want to admit there is a serial killer, even when the media has already dubbed the killer the “Bridge Killer”
Jake does not want to admit that his and Jane’s stories might be connected in the beginning. Especially when Jane’s mystery source ends up as one of the murder victims. Soon though, Jake does have to admit that Jane is right, when all his clues point to the same person.

I did read Mrs. Ryan’s Charlotte McNally series and enjoyed it. This is why I was excited when I saw Mrs. Ryan’s latest book, The Other Woman. This book did meet my expectations. It was fast paced, had lots of drama, and a strong female lead.

I liked Jane. She is what I picture Hank as being in her role as an investigative reporter. Someone who is dependable, hard working, has a nose for the truth and how to get it and deliver it.

Jane and Jake’s relationship is very professional. While I do respect this, I do hope that at some point as the series progresses that Jake and Jane’s relationship does get more romantic. One other minor issue I had with this book was the different characters. There were two intertwined storylines happening at the same time with Jake’s investigation and Jane’s. Which I had no problems with until all the different characters got introduced as there were a lot of people out for revenge and betrayal. Once, I figured who all the major players were then I was fine. I could sit back and enjoy this book. A good start to a new series.