The Devil in Silver 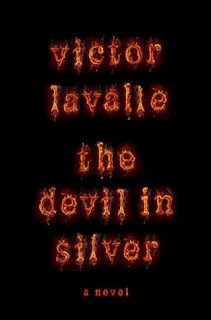 Pepper has just been arrested for assalting several police officers. Instead of being booked in the jail, Pepper is admitted to New Hyde Hospital, mental hospital. The police officers say that Pepper needs to be evaluated for several days. That and the jail has no more room. Pepper does not like the idea of staying in a hospital but what choice does he have. Pepper soon meets a wide variety of people at the hospital.


The first night, Pepper's roommate is waking Pepper up demanding a quarter to make a phone call. Soon Pepper realizes that it is not the other patients that Pepper has to worry about but the "devil". A strange creature that comes during the night leaving his mark and screams can be heard when he visits. Who is he and what does he want?

I am a new reader to author, Victor Lavalle. This book was odd in a good way. It was more character driven and psycological. I am really impressed reading about where Mr. Lavalle wrote this book. Mr. Lavalle wrote it sitting at a Dunkin Donuts.

Pepper and Dorry were my favorites. They were polar opposites but as they say "opposites attract". Dorry was crazy but at times, I wondered to what degree of crazy? Yes, Dorry may have been a patient at New Hyde Hospital for a long time but when she spoke, she actually made sense that you wanted to listen to her. She was like the crazy person that kept you entertained but at the same time you wanted to stray away from getting to close to her.

Pepper was the newbie. He started out as just a normal person but by the end of the story, I believe that he was turning just as crazy as the rest of them. Of course, I can not imagine being in a place like New Hyde Hospital and hope I never have to experience a place like it. I can imagine that the longer you stay in a place like New Hyde Hospital, where the staff don't care about you and are just trying out experiments on you, then you could become crazy like Pepper.

To be honest, the "devil" did not come as a surprise to me. I knew right away who the devil was. I just wanted to know what his intentions were. This is one book that will keep your attention throughout the whole thing from beginning to end. The Devil in Silver is worth a second and third look.
Victor Lavalle

Unknown said…
Being Victor LaVelle Or How OCD, Schizophrenia and Bi-Polar conditions evade him and how it shows in his new novel.
August 28, 2012 at 6:01 PM