Buried on Avenue B is a gritty murder mystery that will have you along for the ride! 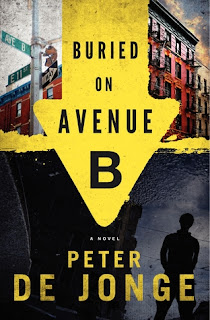 Darlene O’Hara is a homicide detective with the Homicide South. This division does not see much action, however when there is a crime or murder then it is a big deal and the media is all over it.


A woman comes to the police station. She says she wants to report a possible homicide. The woman is a home health aide. She works for a man named Gus Henderson. Gus tells the aide that he buried a guy under a tree on the corner of Sixth Street and Avenue B. There is a park there with a big tree. Dar does not believe the story but decides to check it out anyways. She and Augustus Jandorek get more then they bargained for. There is a body but it is of a small child. Now, Dar and Jandorek have a real murder case on their hands. They are joined by Connie Wawrinka.

I have never read any of Mr. De Jonge’s work before. I am not too much of a fan of Mr. Patterson’s so this is the first time for me to see what Mr. De Jonge brings to the table with his writing style.

While, I was not fully invested in all the secondary characters, I did enjoy Dar, Jandorek, and Wawrinka who are the main characters which is important. The pace of the story moved at a quick pace. Also the chapters were only a few pages long so that made a difference as well. There were a bunch of characters thrown in the mix. Dar would investigate one and then bounce to the next and the next.

Some readers had a problem with the racism in this book but it did not affect me or take away from the story. Not to say that I am in favor of racism but just that I knew where all the rage was coming form. It was part of the story to show the reason for the murder. Buried on Avenue B is a gritty murder mystery that will have you along for the ride!