Freak is almost a nail-bitter but it will have you sitting on the edge of your seat! (Book Contest) 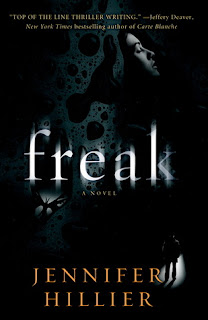 Abby Maddox was the former girlfriend of serial killer, Ethan Wolfe. Ethan was a student of Dr. Sheila Tao. Sheila was Ethan's next victim when she fionally broke things off with him but she was saved. Now Ethan is dead and Abby is sitting in prison.


Someone has started up a website called FreeAbbyMaddox.com. The website is bring out a lot of freaks and another serial killer. This killer is Abby's number one fan. The murdered bodies are found with the worlds Free Abby carved into their backs. Jerry is a retired police officer. He has been brought back on to help with catching the killer. This is because Jerry was a victim of Abby's. So how do you stop a serial killer...ask another one for their assistance.

Freak is the second book from author, Jennifer Hillier. I have to say that Hillier out does herself with this book. I actually can say that it was nice to see Sheila again. Sheila was the focus in the first book, Creep. The reason I say that it was nice to see Sheila is that in the first book, I did not fully connect with her, being a sex addict and all. She came off some what standoffish. In this book, she felt more human trying to recover from the aftermath of what happened prior. I hope that Shelia and Morris work things out and do get married.

What happened to Jerry was horrible. I was glad that he hated Abby and always watched his back around her and kept his guard up. She was not one to be trusted as she would stab the knife into your back as she laughed. Abby had this killer instinct where she used everyone like they were pawns in a chess game. Abby reminded me some of another famous female serial killer...Gretchen Lowell. Yes, that Gretchen. For this fact alone, I have to agree "Free Abby". I hope the intensity stays high in the third book. Freak is almost a nail-bitter but it will have you sitting on the edge of your seat!   Courtesy of the publisher I have 2 sets of this series to give away to US readers only. You will get Creep, the first book and Freak the second book to check out how great this series is for yourself. Contest ends August  12th. Just leave your email address
Jennifer Hillier