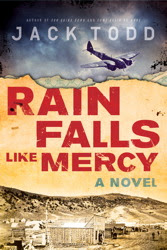 Two Spuds was out riding the fence line for 8T8, when he decided to go into a shack to warm up as the temperature is dropping. Two Spuds approaches the shack, he smells a foul odor. He quickly discovers the source of the smell. It is a young girl. She has been raped and her throat slit. Two Spuds goes back to the main ranch and his boss, Eli Paint calls the sheriff, Tom Call.

Tom is enthralled by Eli’s young wife, Juanita. Soon, Tom and Juanita are having an affair. Things change when the Japanese attack Pearl Harbor. Tom enlists in the Army Air Corps.

Mr. Jack Todd is a new to me author. After reading Mr. Todd’s latest book, Rain Falls Like Mercy, I plan to go back and check out his prior novels. I was spellbound by Mr. Todd’s writing. He is a prolific writer. He brought life to his characters. Had I known how much I was going to like this book, I would not have started it until I had cleared more time in my schedule. This is how it went…Crack open book, read a few chapters, which turned into half the book in one sitting, make dinner and rush back to read the rest of the book. Though Tom and Juanita were having an affair, I was not mad as they were truly in love. In addition, I did not see Eli as a victim. In fact, he was one of the strongest characters in the story for a man of few words. The ending was a high note. This was great as some books can be good up until the ending. I recommend checking out this book!
Jack Todd