The Assassination of Governor Boggs 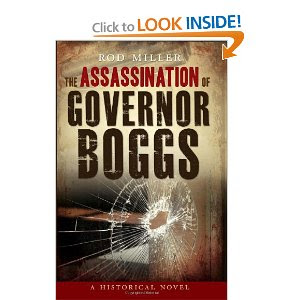 Review by Nancy
In 1842, twenty years before the Civil War, people had their prejudices and had other wars as well. Lilburn Boggs, in his years as Governor of the State of Missouri had many prejudices and was an excellent helper in another war that a lot of folks don’t know about. Lilburn Boggs liked blacks far better than he liked Mormons and took every opportunity to banish them from his state; following them to Illinois to make sure they stayed gone.

He took every opportunity to torment the Mormons, holding Joseph Smith and others in basement jails, feeding them swill and conveniently “forgetting” about them many times - none more than Joseph as he was the Leader of the Saints. Gov. Boggs forgot a few things, though. He forgot the Danites (Smith’s army) were hard soldiers who would break anyone whom they felt threatened their cause.

It came as no surprise when someone tried to kill Boggs – it’s amazing it hadn’t happened before. Headlines screamed that he had been assassinated but they were wrong. While some certainly did shoot him in the head and he surely nearly died – he didn’t. It took him twenty years to finally pass and he was basically a well man most of that time.

Calvin Pogue of the Pinkerton Detective Agency is hired by Boggs’ son after his death. He does a thorough investigation complete with an interview with the “possible” killer – Porter Rockwell which is not only entertaining but makes you wonder.

An extremely well-researched story and you can have your own opinion about the shooting but – it’s well worth reading and buying!

Rod Miller said…
Nancy: Thanks for reviewing THE ASSASSINATION OF GOVERNOR BOGGS. I appreciate your comments and am pleased you found the book worth reading. I hope your readers do, as well. :Rod Miller
November 17, 2011 at 7:41 PM

Samual James said…
It was such a nice experience reading your blog about Nook Reviews. Nowhere else i found such information posts. Thanks for sharing your expertise.
November 17, 2011 at 10:44 PM