If you want to read a good uplifting book without all the calories than pick up a copy of The Pig and Me! 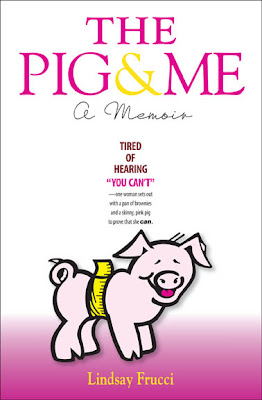 I must admit that I have never heard of No Pudge! Foods. Though, when author Lindsay Frucci wrote me about reading her book, I was willing to give it a time for the fact that I enjoy reading about people starting their own businesses and how they did it.

I have to tell you that reading this book, Lindsay is a success story, even if the ending may not have been the one she was hoping for. I liked Lindsay’s drive and determination. She went from knowing virtually nothing about starting and operating a business to making No Pudge! Brownies a brand name.

It all started back in 1995, though a few years earlier than this. Back when Lindsay and her husband had to file for bankruptcy. Something that Lindsay never thought would happen to them. As no one hopes ever happens to them as well. Though it did. Lindsay’s husband found another job but for less money. Lindsay decided that she had to do something to help contribute to their financial situation. Lindsay racked her brain and could not really think of anything other than the fact that she liked to bake. Lindsay’s one favorite indulgence was brownies. Though eating too many and they can be killer to your waist line. Lindsay decided to come up with a fat free version. Thus, No Pudge! Brownies were created. The success of the company is due to a huge part from Lindsay. She had a vision and would not let anything stop her, no matter how many times she was told “No”. If you want to read a good uplifting book without all the calories than pick up a copy of The Pig and Me!
Lindsay Frucci