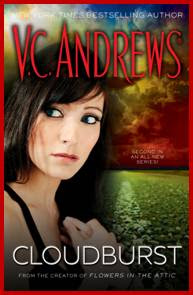 Sasha Porter came from no money. That all changed when Kiera March high on drugs ran into Sasha and her mother with her car. Unfortunately, Sasha’s mother was killed. Sasha was injured but than the March’s brought Sasha into their home. Mrs. March tried to turn Sasha into her other lost daughter. This upset Kiera to the point that she tried to kill Sasha.

Flash to the present. Kiera moved away. Sasha is still living with the March’s. Sasha is trying to get on with her life. Things just got more interesting. Ryder Garfield is the new guy in town.

Cloudburst is book two of the Storms books. I have not read book one but with the references in the beginning, it was not hard to quickly figure out what had happened and get caught up. I was excited to try out this new series as I have enjoyed VC Andrews’s books. To be honest, I found myself having a hard time getting into this book. I tried several times. I would read a few pages or even a chapter and than put it down. The story moved very slowly. There was not enough suspense and intrigue that I came to like from VC Andrews’s books. Sasha had this obsession with trying to get Ryder to like her, though he did not give her the time of day in the beginning. I wanted to yell at Sasha that Ryder was a jerk and to let him come to her. A gallant effort on trying to recreate VC Andrews but just missed the mark.
VC Andrews