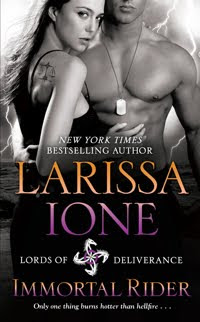 The Four Horsemen of the Apocalypse have the powers to either save the world or let it rot in hell. This is Limos’s story.

Limos is a female horseman. She and her brothers are trying to stop their rogue brother, Pestilence and Limos’s fiancé Satan. Yes, Limos is betrothed to the man himself. Limos may not be a married woman yet but that does not mean that she is free to be with anyone.

Arik wants Limos. So when he gets her alone, he can not help himself. He steals a kiss from her. The next thing Arik knows, he is being dragged into the depths of hell. As punishment for kissing Limos, Arik is tortured over and over again. Can Limos save Arik before Satan claims Arik’s soul?

Immortal Rider is book two in the Lords of Deliverance series. Eternal Rider is book one. You don’t have to read these books in chronological order. This is a good thing as I have not read book one yet. I have read some of this author’s other books in her Demonica series. I found Mrs. Ione’s new series to be darker and edgier. Though, I would classify this book as more urban fantasy than paranormal. When I think of paranormal, I think of a jalapeño pepper with a little kick but when I think of urban fantasy, I think of ghost peppers, they are ten times hotter and will scorch you!

Arik and Limos were sizzling together. For being a human, Arik was just as evenly matched as Limos. What I liked most about this book was that the story line was just as strong as the characters. After getting to know some about Limos and her brothers, I plan to go back and read Eternal Rider, so that I can be ready for when book three comes out in June 2012!
Larissa Ione