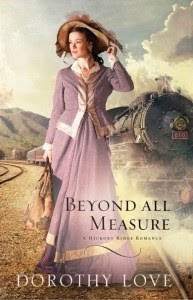 Ada Wentworth has left Boston to come to Hickory Ridge, Tennessee. Ada wanted to see the country. Thus why she applied to be a woman companion. When Ada arrives at Hickory Ridge, she has second thoughts. To make matters worse, the other woman who was to help assist Ada with her job has left town. Now Ada is all alone in a town with no money to get back. There is just one bright spot, her employer…Wyatt Caldwell.

Wyatt owns the local lumber mill. He has not seen anyone as beautiful as Ada. Wyatt starts courting Ada. Ada agrees that the feelings are mutual but Wyatt has made it clear that he plans to leave and go to Chicago. Ada wants to leaves as well as soon as she can gather enough money to go. Thus why she will not give into her feelings for Wyatt. Ada wants to start up a hat shop. Her mother taught her how to make fashionable hats.

Beyond All Measure is the first book in the Hickory Ridge series. This book was good. It may be labeled as Christian Romance but the messages are subtle and not in your face. This brings me to my next point…Wyatt and Ada. Cute couple but not a lot of romance between the two. It seemed that every time that they got together, they would argue.

Wyatt’s Aunt Lillian was someone that grew on me. At first I didn’t like her. She was grouchy and mean to Ada but the more that I got to know her, the more I liked her. The people of Hickory Ridge were an eccentric bunch. They added favor to the story. Some of them I liked and some I did not. Overall, this book is a nice start to this series.

About Dorothy Love
A native of west Tennessee, Dorothy Love makes her home in the Texas hill country with her husband and their two golden retrievers. An accomplished author in the secular market, Dorothy makes her debut in Christian fiction with the Hickory Ridge novels. Hometown: San Antonio, Texas
Dorothy Love

Anonymous said…
I'm glad to see that this is a good start to the series - that bodes well for future books!