I had my Soul Stolen!

December 29, 2010
I don't know about you but I am excited for book four, My Soul to Steal in the Soul Screamer series. 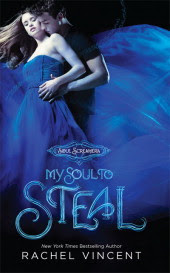 YOU WANT MY SOUL AND MY BOYFRIEND?

Trying to work things out with
Nash—her maybe boyfriend—is hard enough for Kaylee Cavanaugh. She can't just pretend nothing happened. But "complicated" doesn't even begin to describe their relationship when his ex-girlfriend transfers to their school, determined to take Nash back.

See, Sabine isn't just an ordinary girl. She's a mara, the living personification of a nightmare. She can read people's fears—and craft them into nightmares while her victims sleep. Feeding from human fear is how she survives.

And Sabine isn't above scaring Kaylee and the entire school to death to get whatever—and whoever—she wants.

I DON'T THINK SO.

Unknown said…
As a follower of my blog, Books of Amanda Land, I just thought you might be interested to know that I am hosting a book giveaway. Check it out at amandarosetew.blogspot.com!
December 31, 2010 at 12:09 PM