The Curse of a Mind 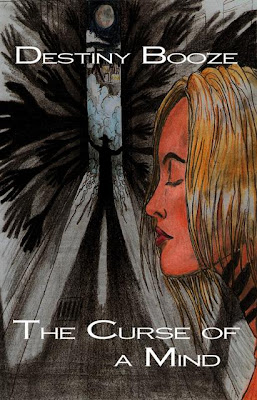 
Chris Chambers is one of the best private investigators in the business. She has built up her team carefully, the only one she may have issues with is the boss' son. Hired as her "assistant". The ony thing he seems to assist is the resignation of office managers after he takes them to bed.
She has just lost a client. In an locked room. To murder. It didn't make her boss happy. Hell, it didn't make Chris happy either that the client died on the day the note she got said he would. Now there is another client. Aidan Wolfe is getting the same notes. A boy was killed but Aidan wasn't really responsible - or was he? All Chris knows is that he's the guy she tried to pikc up last night at Kenny's bar. Her bad.

Chris tries desperately to keep her team together as they disappear, one by one. She also tries desperately not to think about how Aidan makes her feel. Both seem to be lost causes. Meanwhile, someone is trying to kill her client - again. She has enough to deal with taking care of her autistic brother and dealing with her own past.

WOW! I have to say that this book kept me on my toes guessing wrong nearly every chapter. I just knew I had it figured out. I was so wrong! The characters play well against each other and the bad guy/girl/thing was wonderful. The first-person approach to the evil was really well done. You have to go get this one, folks! If you survive the scary story you'll be amazed at the ending!

1. Where on earth did you come up with the premise of Stephen Rice?

I really wish I could tell you...lol. I have such a crazy and active imagination that when I begin brainstorming, it's truly unknown where I'll end up. :) With that said, I knew I just wanted to do something that would stand out, something different. That was my goal.

That actually hurt me when I submitted to publishers because I was told from several companies that they didn't feel like the story fit any specific genre. Thank goodness Whimsical Publications believed in my idea enough to put it out there regardless of whether it fit a perfect mold.

2. What made you bring an autistic brother into the mix?

Great question. I knew I needed something in the story to soften the main female character, Chris. She was so hardcore that I was afraid she might not come across as likable. I played with several different ideas until I landed on an autistic brother named Garrett. And though he was introduced as a strategic technique to help me in the story, I fell in love with him and he actually became a key player in the plot. I thought his condition also fit in with the book's title and overall idea of how the mind works.

Did that sound too technical? I don't want to put anyone to sleep! :) The short answer to that question is that I knew it would be a challenge to write from Garrett's point-of-view and I love a challenge!

3. What's next? Will the killer come back?

Hmmm...I'm not sure. I didn't write the book with the intention of having a sequel. But, you never know what will happen in the future. I love the idea of leaving the possibilities open and letting the reader draw their own conclusions.

4. How do you prepare to write?

Remember those brainstorming sessions I mentioned? lol Well, there you go. :)

I'm definitely a creative type. I'll come up with a basic plot I want to play with, do some background work and research if need be, then I'll do a very detailed character outline. I recommend that to everyone. My stories are just as driven by the characters as they are the plots. From there, my imagination takes over and I'm not only ready to write, I HAVE to write. My head will replay scenes over and over again until I get them out.

Again, thanks for the review! I hope I answered everything satisfactorily for you!