Beneath the Thirteen Moons is one part paranormal, one part magical, one part romance and one hundred percent delightful good reading! 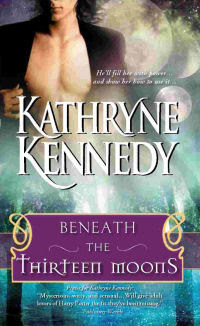 Mahri Zin and her people are desperate for a healer. Mahri knows that if she does not find one soon, it could be too late. Mahri knows that any healer she finds will no go willingly with her, so she kidnaps one. Unfortunately, Mahri ends up kidnapping not only a healer but Prince Korl Com’nder of the Sea Forest. Can Mahri convince Korl to help her people?

Beneath the Thirteen Moons is the latest novel from author, Kathryne Kennedy. Mrs. Kennedy just keeps getting better and better with each book. When Mahri was jealous of Korl and all the attention he was receiving from the woman of her village, I was laughing. Mahri would not admit that she liked Korl, so she would pout, which was funny. Korl knew just how to push Mahri’s buttons without going too far. For being a Prince, Korl was cool. He and Mahri were a good match together. I wished that I had a pet like Jaja. He was so cool. Beneath the Thirteen Moons is one part paranormal, one part magical, one part romance and one hundred percent delightful good reading!
Kathryne Kennedy