Blood of My Brother will give you, your money’s worth…maybe a little more! 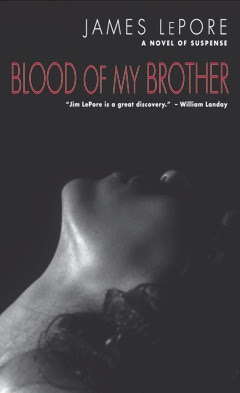 Dan Del Colliano and Jay Cassio were the best of friends. They have each other’s backs. Jay grew up to be an attorney. Things are not looking good for Jay. His current client has just lost her head literally. Jay’s client was Kate Powers. She was married to Bryce Powers. Mr. Powers is a very powerful man like his last name. He owns Bryce Powers & Company. Dan is helping Jay. Dan tells Jay that he is going to Florida to meet with someone to get some dirty on Powers. If Jay had known that this would be the last time that he would see Dan alive, he would have talked him out of going. Now, it is up to Jay to avenge Dan’s murder.

I first was introduced to Mr. LePore when I read his debut novel, The World I Never Made. I could not read that book fast enough. I knew afterwards that Mr. LePore was someone to keep an eye on. I was right.

Jay made Dan proud. Jay fought hard to get justice for Dan’s death. Jay did not back down, no matter how high the stakes were. The action is fast, the characters are good and the story line ever stronger. Mr. LePore knew how to draw me in, right from the beginning. I was pleased with Blood of My Brother. Blood of My Brother will give you, your money’s worth…maybe a little more! I can not wait to see what Mr. LePore has in store next.
James LePore