The Cape Cod Witch and the Legend of the Pirate

May 14, 2009
I want to thank Chris Palmer for sending me a copy of this book to review 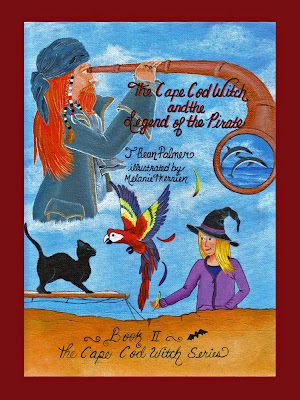 ElsBeth is very excited because her class is going on a field trip to Boston. Hannah is not thrilled with the prospect of ElsBeth heading to Boston. This is because she tells ElsBeth that many witches have gone mad as soon as they set foot in Boston. No witch has ever lasted more then a day in Boston. There are too many unsettled spirits there. ElsBeth appreciates her grandmother's warning but still plans to go to Boston.

The Cape Cod Witch and The Legend of the Pirate is the next book in the Cape Cod series featuring ElsBeth. What a fun, quick read. J Bean Palmer brings excitement, lovable characters, a good storyline and even incorporates math into the picture with this book. For anyone who has kids that want something to read then you have to pick up all of the books in the Cape Cod series. Don't feel embarrassment if you end up falling in love with Elsbeth like I did. I am going to recommend these books to all of my reader friends.

In the Cape Cod Witch Series, the author calls upon her famil’s histor in , including a Revolutionar “Green Mountain Bo”, cranberr farmers and artists, and an oft-told famil legend that as her grandmother’s ancestors stepped off the Maflower, her grandfather’s relatives were there to greet them. With a degree in Environmental Science, Palmer weaves a message of care for the environment into the magical adventures of ElsBeth and her friends.

Anonymous said…
this sounds like a perfect series to share with my daughter. Thanks for the review.
May 14, 2009 at 11:38 AM