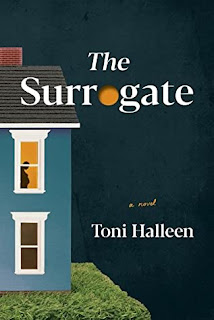 A probing novel about a newly married couple, the surrogate they hire to carry their baby, and the unexpected consequences of their decisions. Ruth is a no-nonsense fortysomething journalist from the Midwest desperate for a child with her new husband, Hal. A divorced attorney and the father of two teenage boys, Hal is open to having another child. But more than anything he wants Ruth to be happy—to become the mother she’s always wanted to be. Their hope rests with Cally, a nineteen-year-old who wants to go to college—but doesn’t have the cash. The arrangement seems perfect for everyone. All through the pregnancy, Ruth and Hal look forward to the new baby that will make their family complete. But within a day of the baby’s birth, Cally has a change of heart – and engineers a harrowing escape from the hospital with the newborn. When Ruth and Hal discover that she and their daughter are gone, a whole series of doubts and secrets are revealed, and it’s no longer clear what’s “right” and what’s “wrong.”Set in the vast, sparsely populated upper reaches of northern Minnesota in the middle of winter, The Surrogate follows Ruth, Hal, Cally, and her boyfriend through the ice and snow, from the city to the dark, frozen north country as they run away from, and ultimately towards, one other.In The Surrogate, Toni Halleen raises thought-provoking questions about the nature of family, love, and relationships. What would you do for your partner, when the going gets tough? How much is a pregnancy “worth?” And who, if anyone, “deserves” to be a mother?

I am still a little bit processing this book even after finishing it. It was a very fast read for me. Yet, the only person I really connected to is Cally. She is the surrogate. The emotions and her acts were understandable. Yet, what Cally did is not something that I would advise anyone in her situation to do; no matter how strong the emotions are.

In regards, to Ruth and Hal, I was not a fan of them. Hal really was at the bottom of my list. He did not seem to really have a interest in being a father. I got a cold vibe off him. Ruth was a bit better but I still did not fee like she truly wanted the baby. The ending! I am not happy with the ending. It kind of left a sour note in my mouth.