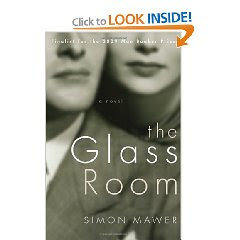 Viktor and Liesel Landauer’s marriage is not one based on love. Though, at the beginning Viktor and Liesel may have at one point loved each other. As time passed they fell out of any chance of love. Viktor had a very forward way of thinking. He embraced the future. Liesel was slower to accept it. While trying to figure out what type of house they wanted to built, the Landauer’s met architect, Rainer van Abt. He was big on modern architect. He convinced the Landauer’s of letting him build their house for them.

Liesel started to flirt with Rainer and hang out a lot with her very vulgar friend Hana; while Viktor pursued an affair with a woman named Kata. As Viktor and Liesel started to drift apart, things changed with the beginning of World War II. The invading Nazi took possession of the famed “glass house”. The Landauer’s moved away, still believing that one day they would return to their home.

While reading The Glass Room I got lost at times but in a good way. I would forget the book was both parts fiction mixed with non fiction. It told like true non fiction in a poetic way. I found it interesting that Viktor pushed for being modern but when it came to it, he preferred the simple life.

The house that Mr. and Mrs. Landauer’s lived in is a real house. I saw pictures of it. It is amazing to believe that anyone lives in it. It looks move like an office building than a home. It is mainly constructed of just walls and glass. The architect who built the home is known in the book as Rainer van Abt but his real name is Ludwig Mies van der Rohe. He was very forward in his thinking of modern design. There are several drawings in this book. I couldn’t help but compare Ludwig Mies van der Rohe to another famous modern architect…Frank Lloyd Wright. They both had visions that while, it may not have made sense at first, when you saw the results, and they were talk worthy.

The first half of this book I really enjoyed. The second half was good but it lost some of its slimmer for me. It happened about the time that the Nazi invaded Germany and the Landauer’s moved away. I found the Landauer’s more interesting then the other characters and so when they weren’t in the fore front, I kept wondering what happened to them. Luckily, all the lose ends were answered at the end of the story. I heard that Mr. Mawer’s prior novel The Fall is really good. I plan to check it out.
Simon Mawer

Anna said…
I'll be reading this one soon, and I'm looking forward to it. I had no idea the house is real. I'll have to research it.

I hope it's okay that I linked to your review on War Through the Generations.