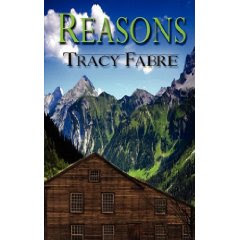 Delphi Brent is going to spend the summer with The Laughlin’s. They are good, family friends. For some reason though, Delphi and her family have not visited the Laughlin’s for at least nine years. The reason for the sudden decease in visits, Delphi’s parents tell Delphi is because the Laughlin boys were involved in the hit and run that left Delphi in a coma for weeks and the scars on her leg.

Even knowing this information, Delphi still wants to spend the summer with the Laughlin’s. Only now, Delphi has a purpose for wanting to visit. She hopes to learn the truth about who was behind the wheel of the car. Delphi develops feelings for Tam, the middle son. Though, she can’t fully give him her heart as he could be the one responsible. What will Delphi do when she learns the truth and will she be able to forgive?

I thought this book was a good one. Reasons is a quick read. The characters were engaging. I really got into the story. The location that this story took place in Statler, Colorado (a fictitious place) did not bug me, as I live in Colorado. The problem, I had was that I wanted to know more about this place and the splendid scenery that Colorado has to offer but that wasn’t really portrayed in the story. One thing that did bug me some was that it seemed only Delphi and Tam was willing to do anything to help Bobbie with his drinking problems. The rest of the family was aware but chose to ignore the issue. Reasons is the first book I have read by Tracy Fabre but is second novel that she has written. Hopefully, Ms. Fabre will have a long success, as she has done a good job with this book. I did think the ending was a good one.
Tracy Fabre