The Hole in the Sky 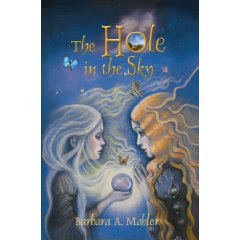 Many years ago in the land of Muraten, there lived a King and Queen. Queen Rhiana was desperate to know if she would have a baby. She wanted to ensure all would be well, so she went to visit a powerful seer by the name of Zella. Zella promises the Queen that she would give birth to a daughter. She tells the Queen that the best thing would be to marry her daughter off to their enemy of the Rugu tribe. Zella tricked the Queen and put a curse on the Murantens.

Thirteen year old, Kaela Neuleaf and her cousin Shawn were at home. Shawn had brought, Tiger, the cat in the house. Tiger wasn’t supposed to be in the house as Kaela’s father is allergic. Suddenly, Tiger takes off into Kaela’s father’s home office. Hidden in one of the drawers is an old diary. It belonged to Kaela’s mother. Kaela misses her.

Later in Kaela’s bedroom, Shawn and Kaela hear a knocking. It is coming from the closet. Inside the closet is a wizzen by the name of Netri. Netri tells Kaela that she is the chosen one. She must come with him through the hole in the sky to Murantenland. Netri says that King Arendore and Queen Skyla’s child has been kidnapped by Gulig, leader of the Rugus. Kaela must go to Murantenland and rescue the child. Join Kaela and Shawn as they have the adventure of their lives.

The Hole in the Sky is a really fun, exciting, fantastical novel of merriment. I liked Kaela and Shawn. They made a good duo. I liked how the story was set up between what transpired with Queen Rhiana and Zella. As soon as Kaela and Shawn went through the hole in the sky, I got sucked in as well. The illustrations through out this book were very nice. They helped tell the story. I do have to admit that I did get lost a bit. There were so many characters that I tried but couldn’t keep them straight. I only paid attention to the many characters and the secondary ones kind of got glossed over. Overall, this was the only issue I had with this book. I do hope to visit with Kaela, Shawn and the rest of the people of Murantenland again. Author, Barbara A. Mahler did a nice job with The Hole in the Sky.
Barbara A. Mahler