They are the Faces of the Gone 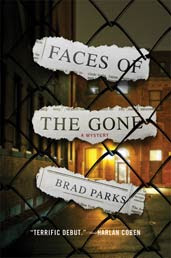 A dead body in Newark, New Jersey isn’t very news worthy. Unless you are talking about the discovery of four dead bodies left in a vacant lot…now that is front page news.

Carter Ross is an investigative reporter for the Newark Eagle Examiner. When this story lands on Carter’s lap, he figures he will just write the story and be done. Once Carter starts digging, he realizes that there is something bigger then four dead bodies. Besides…what does an exotic dancer, a drug dealer, a hustler, and a momma’ boy all have in common? This is the million dollar question; Carter must find the answer too. Carter will be joined be a unique cast of characters that include…the gay Cuban side kick, the city editor, and the stripper

Faces of the Gone is Mr. Brad Parks’s debut novel. He is currently working on Eyes of the Innocent, the next Carter Ross novel.

I thought it was bold that Mr. Parks quit his job before getting a book contract. Luckily for him, it paid off as I enjoyed this book. It is going to be a best seller. You could tell Mr. Parks’s brought his knowledge and experience of journalism to the character, Carter. It helped make the story more realistic. I instantly fell for Carter and his big heart. He is a fighter of justice. The wide range of other characters helped keep the story interesting. Plus they were not one dimensional. You knew from the beginning why the people were killed but don’t let that fool you as there were some twists thrown in the mix. Can’t wait to check out Eye of the Innocent.
Brad Parks