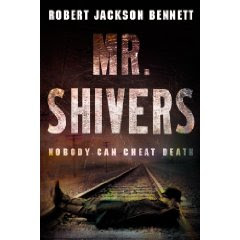 Connelly lost the most precious thing to him…his daughter. Three weeks ago, she was murdered by a drifter. Since that point, Connelly has been following the trail of the vagrant. Connelly won’t give up till he has met his daughter’s murder face to face. He wants to personally kill him for what this man has taken from him.

Mr. Shivers is new author, Robert Jackson Bennett debut novel. I have had my eye on this book, ever since I first saw it a few months ago. It sounded dark and suspenseful. Unfortunately, this time the book looked and sounded better then it actually was. It started out alright. As the story started to pick up and I was introduced to Mr. Shivers, I found him menacing. The issues I had with this book were that none of the characters grabbed me as well as the story line did move slowly. I think of read this book in a daze. Mr. Bennett did show some promise. Hopefully his next book is better.
Robert Jackson Bennett