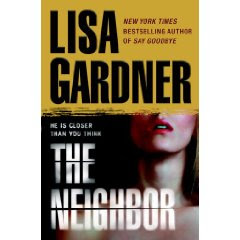 Nothing gets the police and media's attention faster then the disappearance of a woman from her home in the suburbs.

Jason Jones works as a news reporter for the Boston Daily news. He comes home around 2 am to find his four year old daughter, Clarissa "Ree" Jane asleep in her bed but his wife and their cat Mr. Smith are both gone. Jason has no clue where Sandra is other then the fact that something bad has happened. The bed sheets have been stripped off the bed and there is a broken lamp on the floor.

Detective Sergeant D. D Warren is called onto the scene. Warren feels an instant dislike towards Jason from the first moment she meets him. His lack of interest in finding his wife, brings up red flags for Warren. Also, There is something not quite right with Jason Jones. He seems too slick. The deeper Warren investigates she realizes that things are not what they seem at first glance.

Another winner for Lisa Gardner. The Neighbor has all of the making for the perfect best seller. It has drama, intrigue, cutting-edge suspense and an ending that will leave you speechless. I kept trying to figure out who were the bad guys and which ones were the good guys and even I couldn't always tell. One thing I can tell you is that I loved this book. So much that as soon as I was done with it, I had one of my co-workers so curious that she begged me to let her borrow this book. The Neighbor is a great weekend read.
Lisa Gardner

Pam said…
I only started reading Lisa Gardner's books after my little brother, who has hated reading for his entire life, told me he actually enjoyed her books! This sounds like another page-turner!
June 17, 2009 at 7:21 PM

(Diane) Bibliophile By the Sea said…
I just came across your blog, and wanted to let you know I think it is great! Thanks (I look forward to this new book - i enjoy this author a lot)
June 18, 2009 at 7:58 PM

Sheila DeChantal said…
I like Lisa Gardener, I read The Survivors Club many years ago and it is on "favorite books" shelf.

Sheila DeChantal said…
Hi Cheryl - I have posted the review. Thank you so much! :)