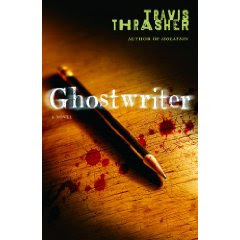 Dennis Shore is a best selling horror novelist. He has given many readers nightmares with his stories. Shore has had no problems coming up with inspiration for his stories till now. Recently Shore experienced writer's block, which is a terrible situation for any writer. It is made even worse with a fast approaching deadline. Shore panics and does the unthinkable...he steals someone else's work and passes it off as his own. The book titled Empty Spaces becomes the latest best seller for Shore.

While at one of his book signing, Shore meets a young man named Cillian Reed. Mr. Reed happens to the true author and he is pissed off. Reed seeks redemption against Shore as all of the glory Shore has been receiving should be his. Anything Shore could have ever imagined could not prepare him for the nightmare he is about to experience, where only the strong will survive.

This story reminded me of the movie Window with Johnny Depp. It was dark, suspenseful, and had a really good plot. Though I suspected there was someone odd about Cillian, I never could have guessed the ending would end the way it did. I liked this supernatural feel that the story had. It kept my interest. Mr. Thrasher is a very creative and exciting writer. I hope to check out more of his work.
Travis Thrasher

Literary Feline said…
I haven't read anything by this author before, but it sounds like I should give him a try. I know Window wasn't a popular movie, but I liked it and wouldn't mind reading a book that is reminiscent of that.
June 3, 2009 at 2:42 PM

Mishel (P.S. I Love Books) said…
This actually reminds me of a movie with Cuba Gooding Jr. A Murder of Crows.