With This Ring, I Thee Dread 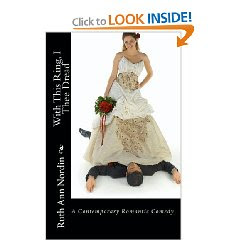 Ryan Jackson and Elizabeth Valentine have been arch-enemies since high school. Both Ryan’s and Elizabeth’s parents agree that it is time these two grow up. That is why their parents propose an ultimatum…either get married to each other or be disowned. Their parents believe they are meant for each other.

I have read several Ruth Ann Nordin novels now. While I do enjoy them, I do have to say that With This Ring, I Thee Dread is by far my second favorite book, after An Unlikely Place for Love. This story is categorized as a romantic comedy and I totally agree. I couldn’t stop laughing. One of the funniest moments had to have been when Ryan and Elizabeth were trying to one up each other by who could gross the other one out the most. For example Ryan knew Elizabeth hated men with mustaches, so he started growing one; where in turn Elizabeth didn’t shave her legs. I did think Ryan was a sweetheart. He tried to learn what women want and even read some of Elizabeth’s romance novels. Of course through he really only read them for the sex scenes. Last but not least, if you are looking for a romantic comedy then you have to pick up a copy of this book today.