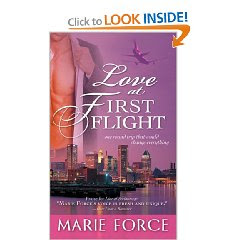 Michael Maguire works as a prosecutor. He has a big case coming up. He is hoping to win his case against some of the biggest gang members in the Baltimore area…The ruthless Benedetti brothers. They have been accused of killing three teenage boys.

Juliana Gregorio is a hair stylist at Panache. She and her boyfriend, Jeremy is currently doing the long distance thing. Jeremy got a job down in Florida. Juliana and Jeremy have been dating since high school. Juliana loves Jeremy but she is tired of waiting and wondering if Jeremy will ever propose to her.

Michael doesn’t know how much more he can take of his fiancée, Paige and her whiny ways. She comes from a rich family and thinks she can boss Michael around. When Juliana and Michael end up on the same flight, sitting next to each other, it is love at first sight. Neither one of them, expect to see each other again. What they don’t realize is that their paths will cross, sooner then they expected.

Another good read from Marie Force. Her last novel, Line of Scrimmage was an instant hit with me. What I like about these books are the characters. They are people that readers can fall in love with. Plus the story lines are very believable. I liked that Michael and Juliana met on an airplane and that they are complete opposites. Like the saying goes…opposites do attract. Juliana and Michael share this great chemistry between the two of them. I can’t wait to read more by this talented author. Marie Force is a force to be reckoned with!


Check out Marie Force's website or her blog
Marie Force

Anonymous said…
I totally agree! Her last book was amazingly good. This one was also a page-turner. Stayed up late to finish it!
June 30, 2009 at 6:58 PM

Marie Force said…
Thanks for the lovely review, Cheryl, and the kind words Becky (and for your review on Goodreads--that was you, right?)

J. Kaye, so great to hear from you and that you loved L@FF. Have you seen the cover of the final printed version? Your quote about LOS made it onto the printed version! I couldn't wait for you to see that! Look forward to my visit to your blog next week!
July 1, 2009 at 1:25 PM

The Bookworm said…
I like Marie Force after reading Line of Scrimmage. This one sounds great!