The Cleaner Jonathan Quinn is back for more! 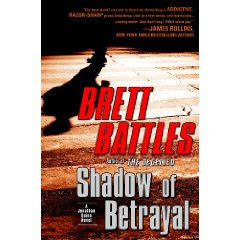 Every body's favorite cleaner, Jonathan Quinn is back in Shadow of Betrayal. Quinn wants to hang up his gun holster and retire with his girlfriend, the deadly but beautiful Orlando but before he can do that, his boss has another mission for Quinn. He wants Quinn to locate a United Nations aide worker named Marion Dupuis. She has gone mission from her post in Africa. This is a task that will require the help of Quin''s protege, Nate and girlfriend Orlando.

Marion has enjoyed helping out at Roslyn's Place. A local orphanage. All of a sudden the soldiers there have become interested in a girl named Iris. Iris was born with down syndrome. This is the second time the soldiers have come paying a visit to Roslyn's Place looking for the girl. Marion doesn't know why the soldiers want Iris. All she knows is that she must protect her at all costs.

Shadow of Betrayal is the third book in this Jonathan Quinn series. Quinn is not afraid to get dirty and let the bodies fall where they may. If you are looking for the ultimate action leading man then look no farther than Quinn. He always gets the job done. Quinn embodies the spirit of Bond, endurance of Jason Statham, and the attitude of Bourne. From the first moment I read The Deceived, I instantly became hooked on Jonathan Quinn and Brett Battles. Battles is a force to be reckoned with in the suspense/thriller world. Don't take my word for it. Pick up a copy of this book or the other two prior novels...The Cleaner or The Deceived today.
Brett Battles